We all do it, don’t we? Walk around feeling guilty about what we “should” be doing instead of focusing on all the things we actually are doing?

Yeah. I think everyone does it, but you know who SHOULDs on themselves the most? Moms.

The SHOULDing starts right away. Pregnant? I SHOULD probably stop drinking wine (LOL, kidding, you really should stop the wine,) I should have a nursery full of all the newest and most expensive baby products prepared for baby’s arrival, I should have a natural, unmedicated birth. I should breastfeed. I should sleep-train. I should co-sleep. I should pump until my nipples fall off. I should be feeling healed and better from my 24-hour traumatic birth 3 days later. I should have lost the baby weight by now…. It literally never stops. And then, it just gets worse.

As baby starts to grow, society (and instagram) can easily chip away at all the layers of the paint color aptly named “all the things I’m doing” and roll over it with a new, cheaper color called “but you should be doing…”

I SHOULD have introduced solids by now, I should have done baby lead weaning. I should do a different sensory activity every day and I should NOT ever let my child watch Sesame Street. My baby SHOULD be crawling or walking by now. I should be preparing healthy meals daily with foods cut into shapes so it’s both nutritious and educational. I should never feed my child store-bought pouches or macaroni and cheese. I SHOULD go back to work… I should provide more for my family. I should be able to juggle work and kids and excel at both. I should do the laundry every day and keep the house sparkling clean. I should have the massive house and chef’s kitchen and brand new SUV.

You’re doing more than you think you are mama. Stop comparing yourself to other mamas who seem to “have it all” or “do it all” because chances are, they’re shoulding on themselves for something else. We are our own worst critics, so be kind to yourself. The work you’re doing is amazing and just what your family needs. 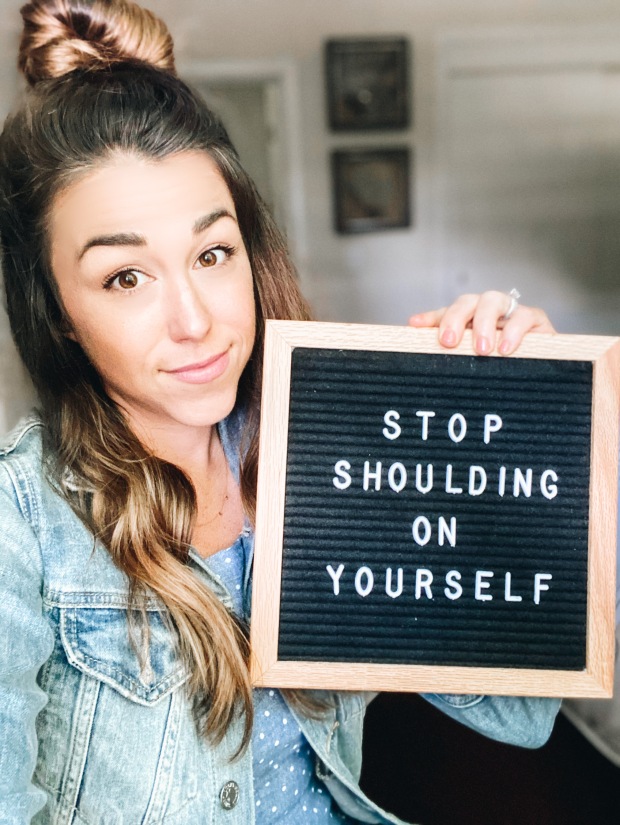 The phrase “It takes a village” never truly resonated with me before I had a baby.  Back then, I thought it meant you’d probably need some friendly faces to bring you a casserole during the sleep-deprived newborn stage, or a few trusting pals to help pick up your kid from daycare. I learned very shortly after giving birth that you need people in your corner for things far beyond the occasional favor. You need a village. A village of gracious, trustworthy souls that can help guide you through the foggy world that is motherhood.

A lot of lucky mamas live near family and friends that can step in and act as their village. But what happens if you don’t? You can do one of two things, navigate that shit alone or find yourself a freakin’ village.

I’d like to strongly encourage doing that later of those two options.

Realistically, not everyone lives near their friends, family or people they can count on. Military families for example, are likely going to be displaced when they and add a tiny new member to their tribe. In our case, we had just moved hundreds of miles away from “home” when I found out I was pregnant. So when the baby came and my husband went back to work, I was pretty much navigating those murky waters on my own.

A few exhausting and overwhelming weeks into new motherhood, it became very apparent to me that I needed support. I found myself wishing so badly I had a readily available “village” nearby to support me and my new little family during one of the most difficult and to be frank, lonely times of my life.

It was during those very foggy weeks that I learned they didn’t need to be physically present to be my people. They didn’t need to ring my doorbell with a lasagna in hand to be exactly what I needed. I realized that a “village” for me was just people to talk to. I’m not talking about chit chat about the weather, I mean, people to really vent to—without judgement. People to be there to listen when I was ready to share my struggles. True conversations about the hard, messy, motherhood stuff you can’t talk about with just anyone. Like true confessions to a therapist at the other end of your fingertips. But on the same token, like-minded individuals to talk about the mundane, boring stuff too. So much happens in the nothings.

Aside from the obvious group of lifetime besties and family, my “village” expanded to include old friends I hadn’t spoken to in years, friends of friends I’ve never physically met, and even strangers I “met” on Instagram. Without even realizing it I was talking to these people nearly every day, because they too were in this weird new club we all somehow knew the password to. That club was motherhood and we were all dazed and confused and in it together. We were all just searching for our tribe. 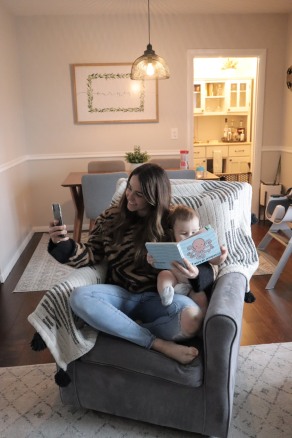 Before I knew it, I had grown to find my village. But there was a catch—they didn’t have an address nearby. They lived in my phone. This random assortment of humans I would likely never see in person, filled a void in a way I never expected.

As months went on, I found myself texting these new found village people before anyone else. Why? Because they too were in my shoes, and maybe they found their village in me also. They too just wanted to vent that their husband “did it wrong” or that their baby wont nap. They too just want to know they’re not the only ones that have days of anxiety and self-doubt. They too just want someone to send pictures of their babies doing baby things back and forth with without worrying that they’re being annoying. They too love to share their baby’s milestones but also share the days their little ones are pushing them closer and closer to insanity. They too want to share easy recipes because they’re exhausted but also want to feed their families. They too, just want someone to talk to. They too, speak the language of a voice text gone wrong, and actually understand it.

They say it takes a village and maybe mine doesn’t live next door, but I’ve got one and a damn good one at that. I’ve got people in my corner. Motherhood can be isolating and lonely, but it can also make you feel like you’ve never been more connected or understood.

When you connect with women in a way you never thought possible, over this one thing that you have in common, that’s when you’ve found your secret society, your support, your village.

The village of motherhood.

Anyone who knows me or who has read this blog, can probably guess I did not thrive in the newborn stage. It was hands-down the most difficult time of my life. So many people told me “enjoy every minute, you’re going to miss this…” and I HATED them for it.

I hated them because that statement, although meant to be harmless, made me feel so guilty that I wasn’t enjoying it. Did I enjoy cuddling that tiny, warm little baby that slept soundly (only) when on my chest? Absolutely. Was I in complete awe of him? Without a doubt. Did I love waking up to that tiny baby’s blood curdling cries every 45 minutes – 3 hours for weeks on end? Sure didn’t. There were women who actually told me, “But aren’t the 2 AM cuddles the sweetest?”

Um…No Sharon, as much as I appreciate the sentiment, 2 AM is not my favorite of all the cuddling time slots. Especially when they’re accompanied by 2 AM projectile spit up, wardrobe (and diaper) changes for both baby and I, and attaching my swollen, bloody boobs to a breast pump every night for weeks. Those nights were the nights I questioned everything.

I won’t carry on about the hardships of newborn life, because if you’re in it right now, I don’t need to remind you. But I will tell you that everyone said it would get better. That you will sleep again. That you will heal.  You won’t always need a plastic squirt bottle to accompany you to the toilet. You won’t always have a bag of frozen peas stuffed into your bra while you rock a screaming 6 pound baby that strangely resembles a roast chicken. That eventually, you’ll wash the spit up out of your hair, and you wont always be pinned beneath a (finally) sleeping baby on the couch, unable to move. I truly thought they were all full of shit, and this was my life now, and that they were all wrong.

But here I am. nearly 9 months into my motherhood journey, and I can tell you—things got better. SO. MUCH. BETTER. They were right. All those parents before me. It’s amazing what a little sleep can do for your mental state. Eventually, we fell into a rhythm. My body healed. We worked through kinks and food allergies and medical issues. Our chronically fussy newborn morphed into the happiest little cherub with the most delicious cheeks you’ve ever seen. I look at him every day and cry for a much different reason. It’s just incredible.  He’s just incredible. Watching him grow and change and learn every day, is just….There are no words to describe it.

Now, I’m thrilled to announce that I’m so incredibly happy. A happy, proud, beaming mama. The one I wanted to be from the beginning. It just took me a little bit to get here.

I didn’t love the newborn phase, and no, I don’t miss it. I miss him being that small, but I don’t miss the vulnurable chaos of it all. There, I said it. I don’t miss the exhaustion, or the fear, or how fragile my tiny baby was. I don’t miss how fragile I was either. I didn’t realize how fragile I was at the time, until I look back and see how far we’ve come, and how strong we are now. There is not a single photo of me with a big toothy-smiled grin until my baby was nearly 2 months old. It breaks my heart, but months 3-8 have been such a joyful sweet spot for us. The smiles, the milestones, the first giggles, the first foods… All the firsts… Did I mention the giggles? Although there are still learning curves and challenges every day, nothing compares to those first all-consuming weeks.

If you can survive the first few months—and you will, although you will question it every day—you will come out stronger than ever! 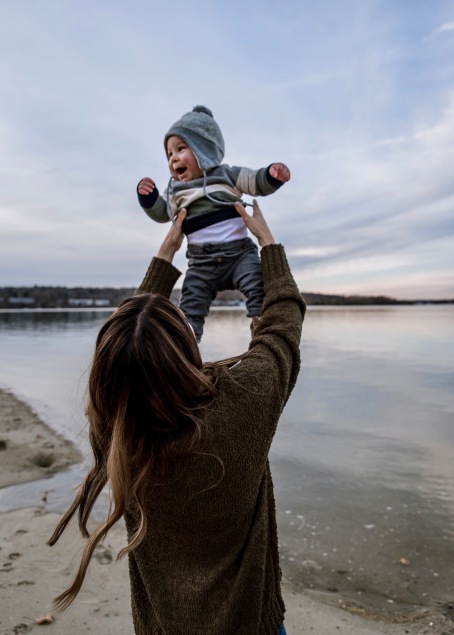 You’re a lot stronger than you think you are. Hang on mama, motherhood is a wild ride filled with seasons, and before you know it, that tough season you didn’t think you’d survive will be in your rearview.  Some seasons will feel like they will never end, but I’m here to tell you, they won’t last forever—promise.

It's Not a Regular Mom Blog, It's a Honest Mom Blog